The Next Chapter Campaign will bring a new ADA-compliant entrance, expanded children’s and youth areas, a coffee area, more room for computers and a Makerspace to the North Lake County Public Library District. The project is designed by Mosaic Architecture of Helena. The campaign has raised $1.5 million of its $2 million goal. 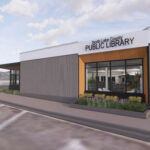 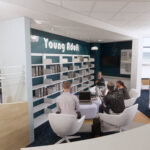 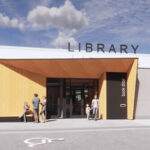 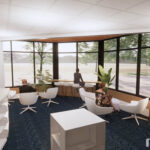 Possibilities from Next Chapter Campaign
New technology programming and more technology equipment will be a reality with the renovations of the North Lake County Public Library District. “The renovation is going to make it easier for me to help people and set us up for success,” said Technology Librarian Sierra Ross. “We will be able to expand into new areas and explore creativity with the makerspace.” Ross is a native Montanan with a love of reading, a background in history and holds a master’s degree in library science.

According to Ross, data from this year shows that the library’s computers are used over 300 times a month and Wi-Fi is used 1,500 times a month. She helps library visitors daily with their technology needs. “With the renovation, I will be visible to patrons,” said Ross, whose desk currently is in the back of the library. “That’s going to increase my ability to help people. Being accessible to people and taking away any barriers can prevent someone from feeling like they can’t ask for help.”

An all-ages makerspace will be added to house the 3-D printer and other maker equipment. Patrons will be able use the space for projects.  Patrons currently use the library’s computers for important tasks like job applications, legal forms, taxes, homework assignments, starting small businesses, creating forms and printing resumes. “Computers and smart phones have become so integrated into daily life, which is why it’s important public libraries provide services and tools of digital literacy,” said Ross.

The additional space created by the campaign will allow for more computers in the public computer area and in the study rooms. The study rooms will have more flexibility as a meeting room with a partition Technology Librarian Excited for New Possibilities from Next Chapter Campaign that will allow the two rooms to be combined for small groups and meetings.

“The library’s technology programming helps patrons use the library’s digital resources, learn new computer skills, and explore special topics like genealogy research, cybersecurity, and self-publishing,” said Ross. With the Next Chapter capital campaign, Ross is looking forward to expanding the reach of technology programming by providing options for virtual attendance.